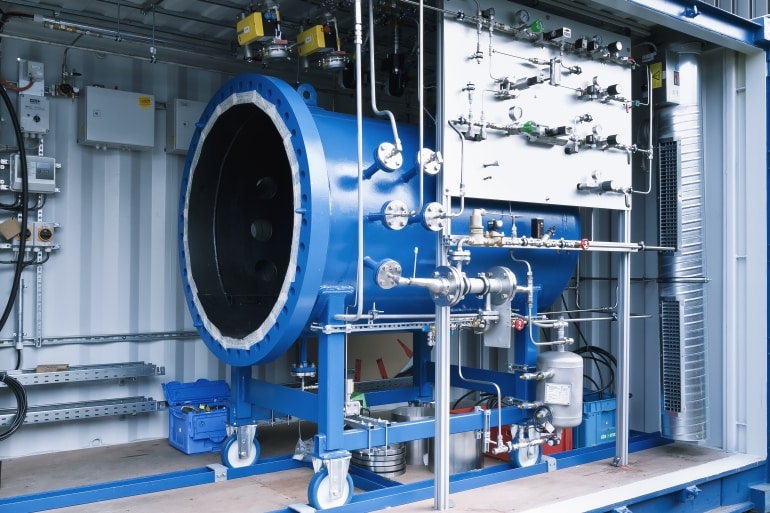 If we’re going to make a move away from fossil fuels, it’s not going to happen overnight; too much of our existing infrastructure and technology is based on coal and petroleum, which would take a lot of time and money to replace.

However, synthetic fuels would be a good interim option, especially if they could be cleanly produced — as Sunfire GmbH has done. The Dresden-based cleantech company has unveiled a rig — the first of its kind — that uses what it calls “Power-to-Liquid” technology to convert H2O and CO2 into liquid hydrocarbons — synthetic petrol, diesel and kerosene.

The technique is based around the Fischer-Tropsch process developed in 1925, combined with solid oxide electrolyser cells (SOECs). The SOECs are used to convert electricity — supplied by renewable sources such as wind and solar — to steam. Oxygen is removed from this steam to produce hydrogen.

In the next step of the process, this hydrogen is used to reduce carbon dioxide (CO2) — harvested from the atmosphere, precipitated at biogas facilities or gathered using waste gas processing — to carbon monoxide (CO); and the resultant H2 and CO are then synthesised into high-purity fuel using the Fischer-Tropsch process. Excess heat from the process is then used to create more steam — ensuring an efficiency rate, Sunfire claims, of 70 percent.

The rig, at this stage, is for demonstration and feasiblity purposes; its capacity for CO2 recycling is currently at around 3.2 tonnes per tonne fuel, and it has the capacity to produce a barrel of fuel per day. The cost of designing and building the rig was “seven figures”, half of which came from public funding received from the Federal Ministry of Education and Research.