Groundwater is a significant part of the hydrologic cycle 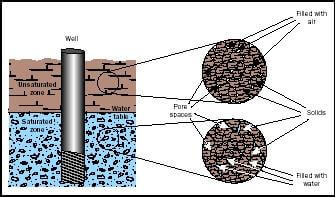 Water that occurs below the ground and is brought to the land surface by wells or springs is referred to as groundwater. Groundwater is a significant part of the hydrologic cycle, containing 21 percent of Earth’s freshwater. Groundwater comprises 97 percent of fresh water not tied up as ice and snow in polar ice sheets, glaciers , and snowfields. This greatly exceeds the amount of water in streams, rivers, and lakes.

Groundwater is critically important in supplying water to streams and wetlands, and in providing water for irrigation , manufacturing, and other uses. In the United States, 80 to 90 percent of available fresh water comes from groundwater. Dependence on this resource will continue to grow, particularly in areas where surface water is limited or has already been fully allocated for existing uses, including instream requirements (and particularly ecosystem needs).

Groundwater once was thought to be of unlimited quantity and naturally protected by the soils above it. It is, however, significantly vulnerable to overuse and the improper use and disposal of chemicals at the land surface. The proper use and protection of this resource requires an understanding of how the groundwater system works. In particular, water managers need to know what groundwater is, where it comes from, how it occurs in the subsurface, and how it moves below the ground.
Groundwater Origin and Occurrence Groundwater is water that occurs below the Earth’s surface at depths where all the pore (open) spaces in the soil, sediment , or rock are completely filled with water (see Figure 1). All groundwater, whether from a shallow well or a deep well , originates and is replenished (recharged) by precipitation.

A well that is drilled will first pass through a zone called the unsaturated (vadose) zone where the openings in the soil, sediment, or rock are primarily filled with air (Figure 1). Water exists here only in transit downward. The thickness of this zone depends on such factors as climate, elevation, season of the year, and area-wide groundwater withdrawals through pumping. In the rainy season of humid areas, the unsaturated zone may be a fairly thin layer, extending from the land surface to only a few meters (10 feet or so) below the surface. But in drier months of the year, the unsaturated zone may extend deeper as recharge to the aquifer declines and withdrawals increase. In arid regions, the unsaturated zone may be a thick layer, extending from the land surface to 300 meters (1,000 feet) or more below it.

Further drilling will reach a zone called the saturated zone where all of the openings are filled with water, and where the water is known as groundwater. If the saturated zone is permeable enough to supply a well with water under normal hydraulic gradients, this saturated zone is called an aquifer. Importantly, an aquifer is not an underground river, lake, or pool. Rather it consists of geologic materials whose open spaces (pore spaces) are filled with water that moves down a pressure gradient, and which can be tapped productively by wells.