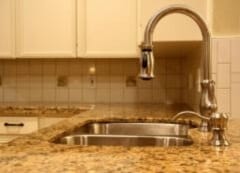 There’s one kind of purchase people make every day that I simply don’t understand: Bottled water.

I’m amazed by the number people I see buying these bottles, individually on the street or lugging them around by the case at the supermarket. Whenever I’m in New York City, I see these bottles everywhere. Street vendors sell them for $1 each. Go to a ballgame and a single bottle can fetch $4 or more. Yeek!

Now, I can understand buying bottled water if there is some water emergency, maybe a power outage that has shut down the municipal water supply or a pipeline break that has leaked in contaminants — or if you live someplace where the tap water isn’t potable (or just tastes really bad). But New York City’s water, like a lot of municipal systems, is supposed to be pretty good. And I never have any trouble finding some free water in Manhattan.

I decided to do a little math to see exactly how much the cost of bottled water purchased on the street compares to what comes out of the tap in New York City. By my calculations, filling a 16.9-ounce bottle with genuine NYC tap water costs about 1.3 tenths of a cent, compared to $1 to buy bottled water (95 cents if you return the bottle for the deposit, which, based on the number of bottles I see in the city’s trash bins, not many people do.) If you were to refill a 16.9-ounce bottle with city tap water every day for a year, you’d pay 48 cents. Let me repeat that: That’s 48 cents for the entire year! (Okay, it might be a little higher if you run the water until it gets cold.) In comparison, buy a $1 bottle of water every day, and you’d pay $346, sans the deposit. That’s more than 700 times the cost of tap. What a racket.

And it’s not as though buying bottled water is any guarantee that you’re getting water that’s purer than what comes out of the tap. While some bottled water may be slightly better than the municipal variety, in other cases it’s the same or may even contain harmful contaminants, such as fertilizer residue and pain medication, according to a study released in 2008 by the Environmental Working Group, a Washington, D.C.- based non-profit. The federal Environmental Protection Agency says some bottled water is nothing more than tap water, some of it filtered, some of it not.

And then there are the environmental impacts. Depending on whom you ask, 70 percent to 90 percent of the tens of billions of bottled water bottles sold each year in the U.S. end up in incinerators or landfills or lying in the street. And then there’s all the petroleum and natural gas needed to make the plastic bottles (enough to fill one quarter of the bottle, according to the website Back2Tap), and truck them around.

If you’re concerned about water quality, you’d find it much less expensive buying a home filter and bottling your own. If taste is the issue, try a blind taste test between bottled and tap water with your family. There’s a good chance you won’t be able to tell the difference.

When I’m in the city or anywhere else, I’m happy enough filling up my own little bottle, no filter or anything else necessary. There’s no way I’m paying $1 for a smattering of water, air, sunlight, or anything else that’s pretty much available for the taking. Call me a skinflint, but I have better uses for my money. And I bet you do, too.
Anthony Giorgianni